A climate scientist corrected a liberal reporter on Twitter Tuesday for suggesting a warming climate is causing hurricanes to worsen. The journalist was not happy.

“So Ryan can feel free to attack me and mischaracterize what I’m saying all he wants,” New Republic writer Emily Atkin wrote on Twitter after atmospheric scientist Ryan Maue criticized her for what he considers spreading alarmist messages on climate change.

“The storm hasn’t even been named & already it’s being blamed on climate change?” Maue said in a tweet, referring to a tropical depression that is expected to form in the Gulf of Mexico. The state of Louisiana appears to be in its path. He was responding to a tweet from Atkin, who called the storm a sign of “things to come in our warming world.”

She added: “I have spent my entire career listening to hundreds of actual experts on climate change and hurricanes.” Atkin’s Twitter bio states that she “write[s] and edit[s] on rats, poop, corpses, crystals, food & health, but mostly the climate.” 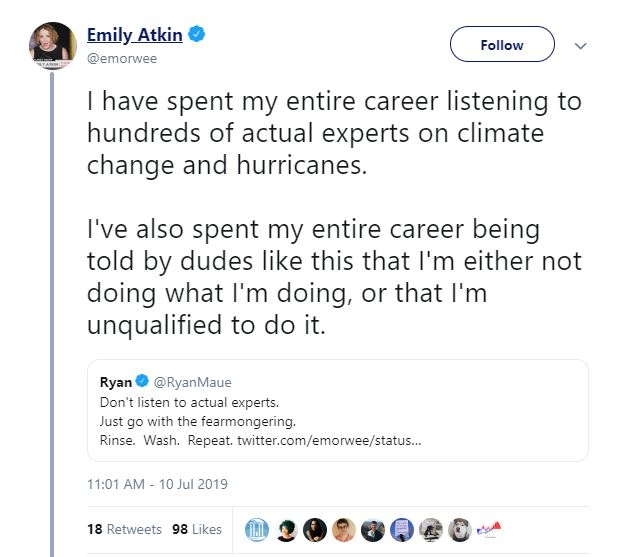 Maue replied later in the day with a tweet reminding his followers to consult experts to understand the ebbs and flows of the weather. (RELATED: House Democrats Spread ‘Lies’ About Climate Change And Hurricanes, Scientist Says)

“Now that Louisiana coast is under threat from a developing hurricane (Barry) make sure to get your weather (and climate) news from reputable sources,” he wrote. “Public (gov’t) + private-sector meteorologists work in parallel to keep you informed and safe.”

Maue is a frequent critic of media reports insinuating hurricanes are worsening because of climate change.

He excoriated Democratic claims in June that “due to climate change, ‘the number of hurricanes that reach Categories 4 and 5 in strength has roughly doubled’ since the 1970s” — a claim that doesn’t line up with scientific assessments from the National Oceanic and Atmospheric Administration (NOAA) and other organizations.

NOAA says the rising trend in Category 4 and 5 hurricanes in the North Atlantic is based on data that’s “not reliable for trend calculations, until they have been further assessed for data homogeneity problems, such as those due to changing observing practices.”