The Twentieth was the Century of the Welfare State.  Governments the world over built and then continuously grew their domestic aid money delivery apparatuses.  Tens of trillions of dollars were spent in attempts to raise poor people up and out.

Read more: The 20th Was the Failed Welfare State Century - The 21st Must Be About Less Government

(Breitbart) When in the course of human events, it becomes necessary for one people to assume that their president, hostile to the principles that formed the nation and determined to act with malice toward its inhabitants by suppressing their rights and

Aesop was a seventh century, B.C. Greek philosopher - mere “storyteller” doesn't do him justice.  The best storytellers are philosophers – because they tap into truths of human nature.  Aesop certainly did that.

Eric Holder and Barack Obama need to man up, do what is honorable for the entire country and end this divisive BS. Neither of these gentleman work to heal this nation, in fact, are fostering, fomenting just the opposite. With that said,

Chicago leftists protested yesterday against the US airstrikes on ISIS and the humanitarian aid to Iraqis.

President Barack Obama pulled it off - he won reelection. He did this despite the fake unemployment rate being above 8% nearly throughout his first term. And the real unemployment rate was 14.7% when people went to the polls.  And it was oh so much universally worse than just that.

All of this added up to a fairly terrible Obama Economy - and somehow a squeaker Obama election win. Can the President now take all this terrible-ness - and make it worse?  Yes He Can.

The Net Neutrality power grab will most likely be thrown out early next year by the DC Circuit Court. Will this chasten President Obama?  No - there’s an even worse way for him to skin the Internet cat.

The President’s Federal Communications Commission (FCC) has zero authority to regulate the Internet - because the Internet exists in law at the FCC under Title I.  Meaning the Commission can’t touch it.

So what does President Obama have waiting in the wings for when his Net Neutrality power grab is thrown out?

Meaning - again, without any legal authority whatsoever - President Obama will move the Internet from Title I to Title II.  Title II is how the FCC over-regulates landline telephone lines - you know, that bastion of innovation lo these last seventy-plus years. Title II opens up the Pandora’s Box of uber-regulation of the Internet.  But wait - there’s more.

Under Title II, President Obama can also begin to tax the Internet - just as the Feds tax landlines.  Just as they already tax the living daylights out of your wireless Internet - checked your cell phone bill lately? It's 17.4% - and climbing.  An $8 billion total take in 2010 - and hurtling ever upward.

And President Obama is looking to open yet another vein.

Is all of this even worse for the Web and the Tech sector than was President Obama’s first term?  Yes, it is.

Seton Motley is the founder and president of Less Government.  He is a writer, television and radio commentator, political and policy strategist, lecturer, debater, and activist.  Please feel free to follow him on Twitter and Facebook - it’s his kind of stalking. 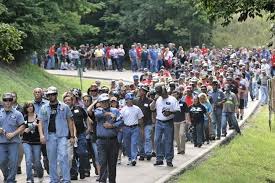 Robert Murray, CEO of Murray Energy, Americas largest privately owned coal company, has been a strong and articulate defender of his industry.

Read more: Murray Energy, the canary in the mineshaft for America and its source of power